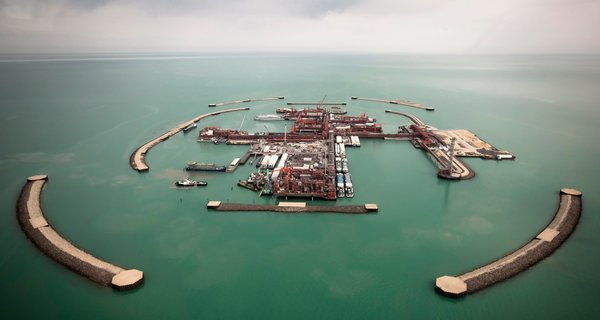 After a few-week hiatus, here’s my latest post. It’s a current event about oil in Kazakhstan.

Following years of delay and billions of dollars in cost overruns, the Kashagan oil field in the Kazakh zone of the Caspian Sea, produced crude on September 11th. Initial production was just 26,000 barrels of oil, but estimates suggest that it should reach 1.5 million barrels of oil per day. Kashagan is the largest oil field outside of the Middle East and is considered vital to Kazakhstan’s ambition to become a major global oil supplier. Some reports state that Kashagan holds 13 billion barrels of recoverable oil. Not surprisingly, the location of this reserve is ideal with several emerging countries bordering Kazakhstan.

Interest in the Caspian Sea began in the early 1990′s, but geologists discovered the field in 2000. At that time it was the largest new deposit since the discovery of the Prudhoe Bay field on the North Slope of Alaska in 1968, and it still is.

So why the delays and a $41 billion overrun in just the past five years? Put simply, it is a very complex project. The following key factors contributed: 1. It’s depth and location in the Caspian Sea. The water is extremely shallow and the oil is under tremendous pressure when it comes out of the ground; 2. The highly pressurized crude oil is also mixed with a poisonous sulfur, which poses an entire other set of risks for the workers; 3. Harsh conditions during the winter months include chilling temperatures and sea ice; and 4. Ongoing disputes with the government and among the consortium of companies invested.

The oil field resides just off the coast of Atyrau, so when Travis and I spent time there last winter (recall my ice fishing post) we had numerous conversations with people involved in the Kashagan project. The situation peaked my interest and I became very curious about Kashagan. Upon learning about this oil field, what was especially interesting to me was that for oil extraction and safety measures, artificial islands were piled one on top of another to serve as drilling platforms. From the sky it looks like an archipelago, but as I now know they are man-made islands used for extracting oil. My immediate association was the Palm Islands in Dubai – ha!