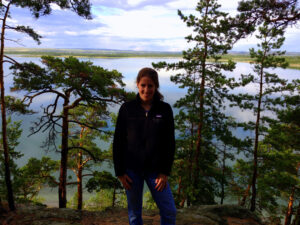 Last weekend we headed north close to the Russian border to Borovoe for a camping trip. We had so much fun!  It didn’t matter that it rained for nearly 70% of the time. 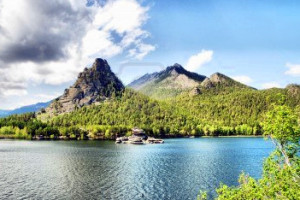 Borovoe is a collection of lakes surrounded by pine and birch trees, which together comprise a National Park. It is considered a resort spot for both Kazakhs and Russians, especially those vacationing from Siberia. The area is quite civilized and developed, which surprised us. There were paved and lit pathways around several of the lakes, numerous hotels and restaurants, designated swimming areas, as well as a mini amusement park of sorts. When we travel outside of the major cities in Kazakhstan we’re used to navigating our own way, on our own terms, and usually without other human interaction. We had to make an effort to get away from it all. 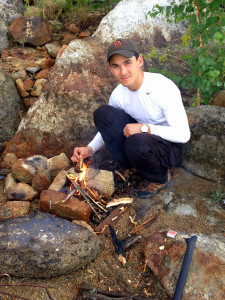 kes. We surveyed four of the lakes before picking our spot. Due to the inclement weather we spent most of the time cuddled up in the three-man tent, which translated into Murphy on one half and us on the other. When the rain stopped for a couple hours we managed to go for a hike and collect wood (albeit soaked) for a potential fire. And… we did it! We built a small fire to heat up water for ramen noodles. (We honed our fire making skills in my New York City apartment making one nearly every night with wet wood and no air circulation). Also, Murphy certainly got his fill of swimming, jumping in and splashing around at every opportunity.

In reference to my last post, while we had an amazing time and we’ll definitely be back to Borovoe, Kolsai Lakes remains our favorite spot!