Milk. It’s a staple in Kazakh cuisine and the variety in Central Asia is astonishing to me. The milk section in a Kazakh market rivals the ice cream section in a US grocery store based on the sheer number of options. Fermented mare’s milk (kumis or кумыс) is by far the most popular among the people of the Central Asian steppe and dates back thousands of years. Fermented camel’s milk (shubat or шұбат (in Kazakh)) is considered a summer treat and is a favorite in Kazakhstan and Turkmenistan. The flavor profile of both is sour, sour, and more sour. Milk anyone? 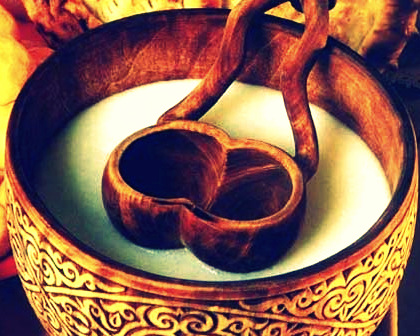 Here’s a brief history of kumis, which is one of the most important beverages to the Kazakh people. Traditional Kazakh food and drink has been strongly influenced by their nomadic lifestyle. It is for this reason that the preparation techniques are aimed at preserving food long-term, including methods to sour milk. Kumis is an ancient beverage originating with the Botai culture in Kazakhstan that dates all the way back to 3700 BC. It’s made by fermenting raw unpasteurized horse’s milk by stirring or churning over the course of hours to days (think butter making). Traditionally, the fermentation took place in horse-hide containers, which were strapped to a saddle.  During a day’s ride the milk would bounce around turning carbonated and mildly alcoholic and voila, kumis was created.

Current production is on a larger scale and there are many different brands of kumis and shubat available for purchase at the local market. Despite more contemporary kumis and shubat producers and bottlers, you can pick up a fresh batch of kumis at a side-of-the-road kiosk made fresh that morning from local horses. The fresher the better; it means it will be less sour.

There’s always fresh kumis waiting for us when we arrive in the mountains. Travis drinks enough for the both of us. It doesn’t go down easy for me. I even tried my hand at preparing kumis while waiting for the weather to clear for a horseback ride. I didn’t sample my efforts, but from what I heard I did a pretty good job!