Hello, it’s been a while! The holidays came and went and then life got busy. The good news is that I now have a backlog of posts to publish. First up is the oh so lovely Astana winter weather.

There’s no question that it’s been a brutal winter in the US with many locations seeing its coldest temperatures in 20 years. I mostly sympathize with those getting the brunt of the ice storms. New York City hit lows of 4 degrees Fahrenheit (or -16 degrees Celsius) at the beginning of January. That’s really cold, but let me tell you, we consistently see weather in the negative 30′s and saw more than our fair share of days greater than negative 40. To the left is a snapshot of the forecast from a few weeks ago. That’s right. With the wind chill it felt like -53 degrees!

I’ve learned that around -35 it all feels the same. The key indicator that you’re in absurdly cold weather is that the inside of your nose immediately freezes when you take a breath outside. It’s a strange sensation that I have never experienced before.

Given the extent of the cold temperatures in Astana it’s not surprising that there’s also low humidity. This helps tremendously. Despite the extreme temperatures I’ve never really felt that

feeling of being chilled to the bone that I felt in New York. On the other hand, the kicker that makes you want to hibernate is the wind. We have these storms called burans (it’s a Kazakh word). There’s really no direct translation in English, but it’s basically a snow-wind-ice storm in the bitter cold with gusts up to 40 mph. There’s no protection here, as we’re surrounded by steppe, and visibility is often times near zero.  Snow and cold weather are common occurrences here, but burans are what cause road, school and work closings. We’ve been in a few of those and it’s when we limit our time outside. Murphy has been lifted off the ground and I have found myself walking in place despite exerting enough effort to be at a running speed. (Check out this video of a buran in Astana. It gets good at around 1:00 minute. http://www.youtube.com/watch?v=jYynF3I8Exk)

I often get asked how we manage in such bitter cold. Many of you also express concern for Murphy. The key is that Travis, Murphy and I each have a standard “uniform” that we wear outside and we never deviate. It’s been tried 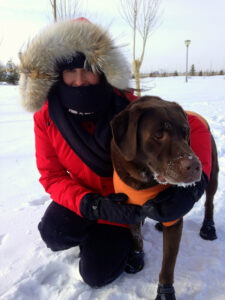 and tested and it works. I’m not one to plug products, but there are a few that have comfortably gotten us through the worst of it and are worth mentioning. They are Canada Goose jackets (worth the hype), Kombi mittens and Ruff Wear products for dogs. For dogs, the biggest areas of concern are the pads on their paws and stomachs. Murph has boots, a fleece base layer and a puff. He’s golden! He loves playing in the snow and chasing rabbits in the fields.

I’m happy to have made it through the worst of my first Astana winter and am now anxiously awaiting warmer weather. The winter season typically runs from October to April, which is way too long for me. Enough already! Bring on the heat.

Next up are two work posts: My global EXPO 2017 exhibition in Abu Dhabi and a trip to Bishkek to film the Tumar Crafts artists in action. I’m happy to be back posting!